Arsenal began this campaign with a chance of ending the much talked-about trophy drought as football offered the Gunners four competitions to challenge on all fronts.

20 games into the Premier League, Arsenal is nowhere near contention for Premier League honors this season, so focus was firmly shifted elsewhere with the cup competitions becoming a priority.

After two pulsating Capital One fixtures where the Gunners smashed in six past Coventry and seven past Reading, a humiliating penalty shootout loss to Bradford City in the quarterfinals caused a stir in the football world, and as expected, the fans asked for Arsene Wenger’s head on a plate.

After finishing Group B as runners-up, Arsenal has braced themselves for a crunch fixture with European juggernauts, Bayern Munich, but yesterday’s fixture against Swansea came in a competition that was labeled as Arsenal’s most realistic chance of winning silverware this season, the FA Cup.

After a blistering run of four league wins in a row, the Gunners played so poorly against Southampton, causing the manager to make some changes ahead of yesterday’s clash with Swansea. Per Mertesacker returned to make his 50th Arsenal appearance in Thomas Vermaelen’s stead, Olivier Giroud replaced the Ox with Theo Walcott drifting back to the right and sadly, Aaron Ramsey got the nod ahead of Lukas Podolski.

Mysteries of life RT @Goonerrific_ Don't understand Wenger, why would Ramsey start over Rosicky and The OX just baffles me.

The Welshman was under some stick from the home crowd due to his ties with his previous club, Cardiff but Ramsey went on to put up another questionable performance. To be honest, I really feel sorry for Ramsey and with each passing game, he continues to deteriorate.

He used to be a bright star in the making, now he’s more or less a jack-of-all-trades but master of none.

The Welshman is best suited for a role in central midfield but his performances and form can’t allow him to displace the fatigued Santi Cazorla and the spirited Jack Wilshere. Instead, Wenger continues to deploy him in both flanks where he continues to struggle before an inevitable substitution.

Swansea started the game with a measure of confidence, as they were victorious against the Gunners in their last two outings. After some intricate passing play in midfield, the Welsh outfit got in behind Kieran Gibbs but the teasing cross into the box was duly intercepted by Bacary Sagna. The French defender went on to have a somewhat frustrating evening.

Ex-Gunner, Kyle Bartley, replaced skipper, Ashley Williams, in the heart of Swansea’s defense and he went on to have a good game by his standards. He almost went as far as rattling the cross bar for his new team. The defender’s distribution was pretty decent and he caused Arsenal some problems when he lofted an over-the-top ball for Danny Graham that stung Wojciech Szczesny’s palms with a shot.

Arsenal responded with a promising attack where Walcott, Giroud and Wilshere worked in tandem to create a chance for the pacy English forward but his attempted shot was blocked by Chico Flores.

Arsenal continued to penetrate through the left to create a great chance for Ramsey but he chose to dally on the ball and that good chance went begging. When a simple left-footed would have at least forced Michel Vorm to make a save, Ramsey chose to bring it to his right, allowing the Swansea defense to clear the danger.

The Gunners continued to pose threats through the left and within moments, a Gibbs cutback was sent to the stands by Santi Cazorla. After an infringement from Ramsey, Jonathan de Guzman swung in a cross that was attacked by Bartley but luckily for Szczesny, the cross bar spared his blushes.

The first half was a somewhat dull and cautious affair but the Gunners played with more urgency in the second half, as they knew that with more determination, the game was theirs for the taking. Unlike the Gunners that needed to get something out of the game, Swansea had half an eye on their Capital One semifinal clash with Chelsea.

Arsenal drew first blood in the second half when Giroud’s sliced shot was blocked by Vorm. There was a moment of controversy when Aaron Ramsey tripped in the box and there were appeals for a penalty, but Howard Webb was having none of it.

Giroud continued to threaten the Swansea rearguard and showed great technique to blast a Gibbs’ cross straight at Vorm but he was in some discomfort in the follow up, as he received a stamp on his knee by Chico Flores.

Swansea gaffer, Brian Laudrup, sensed that the Gunners were on the ascendancy so he summoned his Spanish contingent of Pablo Hernandez and the scourge of Arsenal, Miguel Michu, to replace Wayne Routledge and de Guzman.

Within moments of his introduction, Michu gracefully received a rash clearance from Laurent Koscielny before chipping the ball over Mertesacker with consummate ease. With the attacking midfielder having it all to do with intense pressure from Sagna, he still managed to place the ball past Szczesny to make it 1-0.

The goal served up as a wake-up call for the Gunners and it became one-way traffic as the game progressed. Ramsey showed off some good footwork to swing a cross for Giroud but the Frenchman glanced his header wide. Wilshere also executed a neat one-two with Giroud but he flashed his shot wide.

Wenger had sensed that Swansea’s Achilles Foot was their right hand side as the Gunners created chance after chance from that position with Kieran Gibbs at the thick of things, so he brought on Lukas Podolski to add his verve from the left.

Eight minutes after Podolski’s introduction, Walcott swung in a rather dismal corner that was headed back into the fray by Sagna on the far post. Koscielny showed great determination to win the ball before firing it to Podolski’s path and the rest they say was history.

Podolski showing off his great technique to equalize for the Gunners

As Arsenal fans reveled in their team’s deserved comeback, Gibbs and Giroud combined superbly to send the fans into raptures with a quick-fire second goal with a strike worthy of being a match winner.

Gibbs cushioned a pass to Giroud and made a diagonal run into the six-yard box before receiving Giroud’s peach of an assist to blast the ball past Vorm in goal. 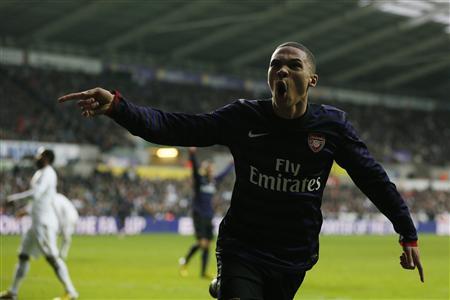 What a way to score your first goal of the campaign!!!

After going down to a team that had defeated the Gunners for two games in a row, Arsene Wenger’s Army showed great mental strength to overcome a deficit to get a well-deserved lead. With the immense quality present in Arsenal’s current crop of players, if and only if they played with the same determination all season long, they won’t be languishing in sixth place in the league.

The Gunners were seven minutes away from a Fourth Round tie with Brighton and Hove Albion, if only they held on. Only if. 🙁

I had hoped for the boss to bring on Francis Coquelin or even Thomas Vermaelen to sure up things at the back but the team had lapses in concentration, allowing Ki Seug-Yeung to fire a shot straight at Szczesny. With three minutes of regulation time left, Swansea pushed forward for that all-important equalizer and got it when Ki teed up an unmarked Danny Graham that wasted no time in smashing the roof of the net.

Where was the marking?

That late goal epitomized what has gone wrong with the Gunners throughout the season. In a game where high concentration levels were key, the Gunners switched off in their box, allowing Graham a clear-cut chance at goal, which he took with open arms. Szczesny’s positioning was suspect as well, as he was quick to hit the deck instead of standing his ground.

When the fourth official raised his board to show that both teams had only five more minutes left, both teams went for the kill and it would have been a fairy-tale ending for the Gunners if Koscielny’s header wasn’t parried by Vorm. The defender showed great reaction to make a rebound but his shot went over the bar.

Right at the death, Swansea almost delivered a sucker punch when Dwight Tiendalli almost caught Szczesny off guard with a cross-turned-shot that hit the side netting.

The sound of Howard Webb’s whistle ensured that both sides would lock horns again next week with a place in the Fourth Round up for grabs.

In Wenger’s post-match interview, he spoke about how his team showed great character but he was very frustrated with the late equalizer. He also spoke about the Ramsey penalty incident, the congested fixture schedule and Kyle Bartley.

Arsenal is in for a very tough January with Premier League fixtures against Manchester City, Chelsea and Liverpool around the corner. There’s also the issue of the FA Cup replay against Swansea and a potential Fourth Round with Brighton and Hove Albion, should they succeed.

This will be a very testing period for the Gunners and their destiny will be reshaped at the end of this month.