After a long preseason campaign, the 2013/14 Premier League graced the Emirates as Per Mertesacker led out this injury-stricken Arsenal side to take on Aston Villa. Bacary Sagna passed a late fitness test to get the nod ahead of Carl Jenkinson but Santi Cazorla was deemed not fit enough to start and Tomas Rosicky took his place.

The home side went off to a flyer when a Rosicky through ball located an unmarked Ox that bore down on goal before picking his spot and locating the red-hot Olivier Giroud. As you would expect from a striker on form, the Frenchman’s one-timed shot eased past Brad Guzan to send the Emirates into raptures.

With the Gunners having a lot of players in the treatment table, there was a huge concern when Theo Walcott and Nathan Baker clashed with each other. Walcott managed to return to the pitch after some treatment but Baker was replaced by Ciaran Clark, as he came out as second best in the challenge. Jack Wilshere made one of his trademark darting runs and got to the byline before lofting the ball into the box but Giroud failed to connect with the header.

Against the run of play, Gabby Agbonlahor turned on the after burners and took advantage of a gaping hole in midfield before easing past Laurent Koscielny as if he wasn’t there. With Agbonlahor one on one with Wojciech Szczesny, the Polish goalie made a rash challenge on the forward but the ref chose to give Aston Villa the advantage but when Andreas Weimann’s shot hit the side netting, the ref pointed to the spot.

Szczesny parried Christian Benteke’s penalty to the Belgian’s path and he nodded the ball home with a rebound. Arsenal’s injury woes were compounded when Kieran Gibbs clashed heads with Weimann leaving the Englishman in a bloodbath. The fullback clearly looked concussed and he was replaced by Carl Jenkinson, which ultimately meant that Bacary Sagna was drafted to the left hand side in Gibbs’ stead.

The atmosphere for the game was very heated and Wilshere went berserk when Ron Vlaar clattered him as he made another run at Aston Villa’s backline. The fiery young lad tried to get his own pound of flesh and he got a yellow card for his troubles, along with Vlaar for the initial foul. 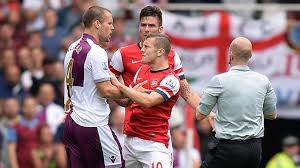 Things almost went awry for Aston Villa when Antonio Luna and Guzan were involved in a mix-up which allowed Walcott to capitalize on the situation but his ball to Giroud was intercepted and cleared to safety.

Szczesny then made a glorious mess of things when he raced miles away from his goalline to clear a ball but he launched it into orbit and when it landed, he nodded the ball straight to Benteke’s path. Bearing in mind that he couldn’t go back to his post immediately, Szczesny went ahead to mark the Belgian and after successfully dispossessing him, the ball went straight to Weimann that didn’t need a second invitation to fire the shot at goal. To everyone’s relief, Szczesny recovered back in time to make a good save.

At the end of the first half, there was another injury scare as the Ox clashed with Antonio Luna and he never fully recovered as he was replaced by Santi Cazorla and the start of the second 45 minutes. Cazorla’s introduction brought some extra fluidity to the midfield but Rosicky was at the thick of things, dominating the midfield and spraying short passes like hot knife through butter.

However, Rosicky was culpable for a horrendous miss after a deft lay-up from Giroud. At a moment where finesse and precision was key, Rosicky opted for power and blasted the ball over the bar. Wilshere tried to play his way out of trouble but he was dispossessed and some open space allowed Fabian Delph to let one rip and it smashed the post and went out.

Just when we thought that we thought that we had seen it all, Agbonlahor went on another mazy run and Koscielny did well to intercept the ball but his legs also impeded Agbonlahor shortly afterwards. In rather acrimonious circumstances, the referee pointed to the spot again which made him incur the wrath of the Arsenal faithful. Koscielny also received a booking that was to have a greater impact later on.

Unlike the first penalty that was rather tame, Benteke applied a cool head to send Szczesny the wrong way, handing the visitors a shock lead. To add salt to Arsenal’s wounds, the official brandished a second booking to Koscielny following a challenge on Weimann, which ensured that the French defender had an early bath as he was sent off.

Arsenal went gung-ho in search of an equalizer and a Rosicky surge saw the Czech maestro scythed down in an exciting position. Walcott’s free kick went above the way but it curled away from goal. Arsenal had a glorious chance to equalize when Giroud teed up Rosicky again, and the Czech midfielder evaded some markers but his shot at Guzan was aimed directly at the goalie, offering him a chance to a fine save.

Rosicky then turned provider as he darted into the danger area before heading the ball to Cazorla’s path. The hobbit fired his goalward shot at the ground but Guzan was on hand to make another fine save. Benteke had a chance to seal a hat-trick but he blasted his shot wide off the mark.

With Arsenal going for broke, they left some gaping holes at the back and the match clincher arrived when Luna was on the receiving end of a through ball from a counter attack and when he was one on one with Szczesny, I imagined the worst, and the worst it was – Arsenal were losing at home to an Aston Villa side that struggled badly last season.

A major concern came at the end when Sagna fell rather awkwardly on the ground and the Emirates held its breath as the physios worked their magic on the defender. Even if he managed to get back on his feet, his participation was over as he was replaced by Lukas Podolski right at the death.

At the sound of the final whistle, the boos reverberated round the Emirates as the fans were clearly dissatisfied with how their team performed.

Coupled with the fact that the Gunners have began their Premier League campaign on a low, three key players have joined the ever-increasing injury list and one must wonder what is going through Arsene Wenger’s mind in regard to the thin-bare nature of his squad.

In his post-match press conference, spoke about the game, injuries and transfers. According to the Mirror, Alex Oxlade-Chamberlain could be out for three months, as he was seen on clutches after the game. It’s believed that he has sustained a knee ligament injury, which is a massive blow for Arsenal and England.

This wasn’t what we imagined when we saw both team sheets but this is what football is all about. However, I have a very pressing question;

With Koscielny suspended and Sagna suffering that injury, who will play alongside Mertesacker wen we play Fulham?