Abou Diaby as a DM: Good Experiment or Bad Mistake?

Despite the fact that Arsenal fans are rightly unhappy about the Capital One Cup third round exit, there were some positives to take from the game. The youngsters did really well on the night, David Ospina finally made his long-awaited debut and Arsenal fans can’t wait for the next time Alexis Sanchez will play a dead ball on the edge of the opposition area. There was also a rear appearance for the forgotten Frenchman, Abou Diaby, and in the Gunners’ bid to chase the game, he was replaced by Santi Cazorla in the 66th minute.

Interestingly, Diaby played as a holding midfielder and he didn’t even make any of those his trademark runs, allowing the likes of Jack Wilshere and Tomas Rosicky to do the attacking work through the middle. He looked tidy in possession and I’ve never seen Diaby play in such a disciplined manner in a long while. It was after the game, the fans got to know why Diaby played the way he did.

Apparently, Arsene Wenger has revealed his plans to convert the French box-to-box midfielder to a defensive midfielder,

“I will try to transform him because he was injured and has the physical potential to win the challenges, to face the game will be easier for him than to play back to goal with the injuries he had.

“I’ll try to develop him in a deeper role. I think he can do it, he can be very interesting, has all the attributes,

“He must love it as well because he’s more of an offensive minded player.”

Many Arsenal fans will take this with mixed opinions but before I buttress on that, why don’t I take sometime out to write about the players currently occupying the holding midfield role. 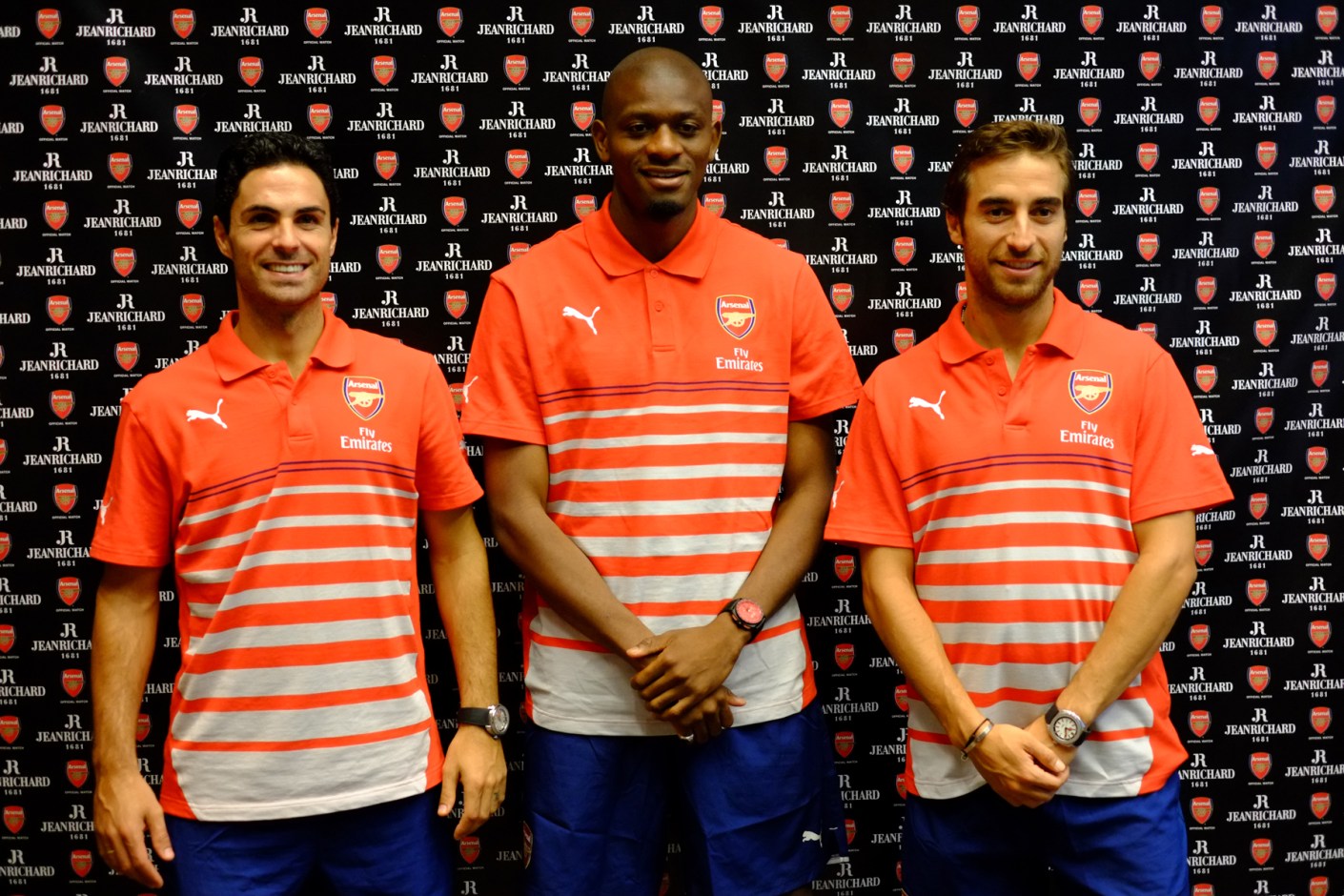 The club’s primary holding midfielder, Mikel Arteta, and his deputy, Mathieu Flamini, are aging and they’re not ‘athletic enough’ for the role.

Fervent watchers of the beautiful game will vividly remember that Arteta was a brilliant attacking midfielder at Everton and many felt that his failure to feature for Spain was a travesty. In his first season at Arsenal following his arrival on transfer deadline day in 2011, Arteta played alongside Alex Song but with the Cameroonian departing for Barcelona, Wenger decided not to replace him – instead, he handed Arteta the role.

Arteta isn’t your traditional DM because he’s more brains than brawn. He holds up play, his composure (in middle of the park and from the penalty spot) is top-notch, he dictates the tempo well and his passing stats are up there with the very best in the Premier League. However, he has his flaws and his lack of athleticism and agility have haunted him times without number. He’s also reaching his twilight years and as expected, his legs won’t be able to keep coping with the rigors of the English game. There’s also the issue of his fitness, because he has had his fair share of injuries since joining three years ago.

As for Flamini, he’s a far cry from the beast that haunted Premier League offensive midfielders in the 2007/08 season but he hasn’t lost his penchant for picking up yellow cards with consummate ease. After leaving the club in his prime to join AC Milan, the Frenchman learned that the grass wasn’t actually greener on the other side (even though his bank account was definitely greener) and after five seasons with the club, Arsenal offered him a second chance and he grabbed it with both hands.

However, the fans have been very dissatisfied with the personnel in that position and they were hoping that with the club now finally able to flex its financial muscles, they were going to sign a proper DM. Names like Sami Khedira, William Carvalho, Adrien Rabiot and Morgan Schneiderlein hit the back pages but none became a reality.

Now Arsene Wenger has hinted the fans that Abou Diaby, of all people, is probably going to be the answer to the club’s holding midfield problems.

It could actually work you know – Diaby has the physical strength and the right frame to be a domineering presence in that role (think Monsieur Patrick Vieira) and he also has the technical ability to do a tidy job in the middle of the park (think Gilberto Silva). Unlike Arteta and Flamini that move like old petrol tankers, Diaby is very mobile and he has him some long legs that can be a useful tool when he wants to make those pin-point tackles. If he continues to show the discipline he did on Tuesday night and learn to curb his attacking instincts for a defensive one, he could be like the perfect Frankenstein and could shock the fans.

There’s downside to this making Diaby a DM. As Bleacher Report’s Arsenal Correspondent, James McNicholas rightly stated in his article,

There is a fundamental flaw in Wenger’s plan: It seems crazy to place your most injury-prone player in the most combative area of the field. The middle third is a war zone where only the most robust players thrive. Diaby does not seem cut out for that kind of battle.

Diaby’s injury record at Arsenal is nothing to write home about. This infographic by TalkSports gives more insight on all the injuries the Frenchman has suffered in his Arsenal career.

In nine seasons with Arsenal, Diaby has made just 179 appearances. Abou Diaby’s career went downhill after that horrific Dan Smith tackle in 2006 when Arsenal visited the Stadium of Light and since then, he has made more trips to Arsenal’s treatment table than the amount of gel Arteta puts on his hair.

The holding midfield role is a high impact role in football where would be mistimed tackles and the whole nine yards when a football battle is going on. With a player with a wretched injury record like Diaby’s, it might be detrimental to his game if he comes under the end of some nasty tackle in his opponent’s bid to win the ball.

I’m no Arsene Wenger and I’ve never managed real players before (maybe a couple of virtual folks in FM) but what the gaffer sees in his team sitting on a chair, many self-proclaimed tacticians (fans) can’t actually see standing on a tall tree. I won’t deny that I’m one of those fans that have been clamoring for a new holding midfielder but we can’t do anything about that till January at least, and with a lot of football to be played between now and January, we might as well see what Diaby has to offer in holding midfield.

Then again, will it be a good experiment or a bad mistake?