Granit Xhaka on the Losing Side as C. Ronaldo Blitzes Switzerland 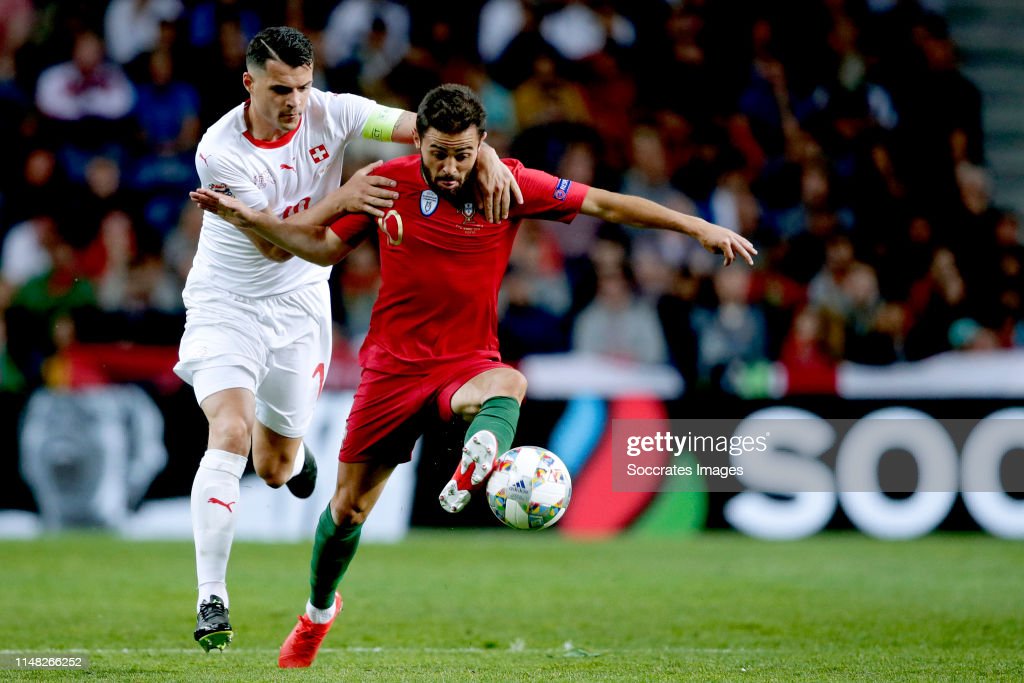 The end of season paves the way for some international football without disruptions which allows nations to feature their best talent in their respective bids to win the competitions they are registered in. It seems like eons ago, but many were skeptical about the UEFA Nations League tournament but following some brilliant matches as well as some good organization I must say, we are down to the last four of the inaugural tourney as Portugal took on Switzerland in front of a capacity crowd with a chance for another European final.

Just three years ago, they went to France and grabbed home the European Championships, even though the hosts were overwhelming favorites to go home with the trophy. Three years on and Fernando Santos side, led by their inspirational captain, Cristiano Ronaldo, locked horns with a Swiss team led by Arsenal’s Granit Xhaka. The Swiss might not be world beaters but they have held their own well in recent matches, since their Round of 16 exit in the 2018 FIFA World Cup. They left a lot to be desired with their defending when they gave up a shock 3-0 lead against Denmark to draw 3-3, but they were fully aware of the threat Portugal would pose, especially with the likes of Ronaldo in their ranks.

We didn’t wait to long to see the Swiss net bulge as Ronaldo stepped up to dispatch a well taken free kick that left Yann Sommer rooted with no chance in Hell. The usually reliable Manuel Akanji struggled alongside Fabian Schar, as Portugal continued to barrage the Swiss with waves and waves of attack. The Swiss had some good chances of their own with Xherdan Shaqiri clean through on goal but Rui Patricio was on hand to make a point blank save. Haris Seferovic, that plies his trade in Portugal, had a glorious chance as well, but his effort smashed the wrong side of the cross bar and went over.

Our darling VAR wasn’t going to be left out, as it was used to determine a penalty that was awarded to Switzerland when Nelson Semedo was adjudged to have pushed Steven Zubar. Rui Patricio guessed right to dive in the direction of Ricardo Rodriguez’s penalty but he was really disappointed to see the ball creep under him to level the contest for the Swiss. It wasn’t against the run of play as Switzerland had been giving Portugal a run for their money in what I’d regard as a balanced game.

We never want to see any of these professionals suffer any injuries but it wasn’t a pleasurable sight for the experienced Pepe, as injury forced the hand of the gaffer to bring on Jose Fonte. Good job by Ruben Neves holding the fort while Pepe was being treated. For such a technical metronome in midfield, he wasn’t half bad in the few moments he served his nation as a make shift center back. 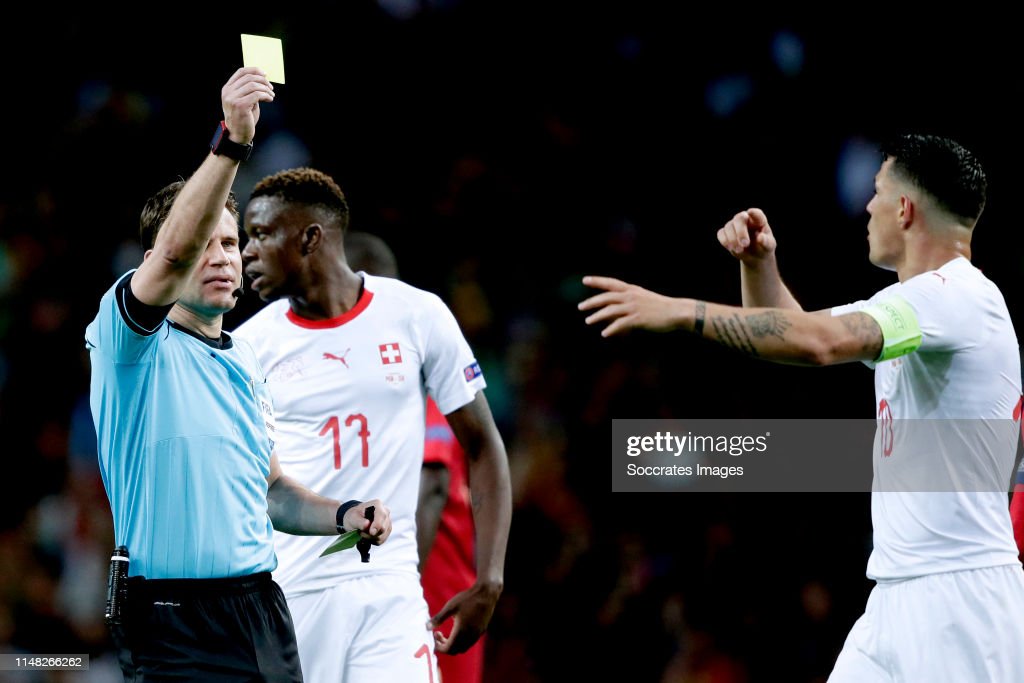 For a player that picked up 14 yellow cards across four competitions last season, it was no surprise to see Granit Xhaka in the book again, when he tried to swap jerseys with Bernardo Silva. I guess he couldn’t wait till the end of the game.

With extra time looming, I was wondering whether there was going to be a match winner in regulation time but as the saying goes, ‘cometh the hour, cometh the man‘ and Portugal’s main man, Cristiano Ronaldo, delivered once again, arriving late in the box to fire in a near post piledriver from B. Silva’s cut back. Sommer was nowhere to be found when Ronaldo’s free kick embarrassed him in the first half but conceding that way in his near post was really questionable. Ronaldo certainly wasn’t done with the proceedings as he rolled back the years with some fancy footwork late on before blasting a trademark drive to the bottom corner.

90 minutes played, one chance created, 91% pass accuracy, 29 accurate passes, 49 touches, 10 duels, three attempted dribbles (all successful), five shots and most importantly, three goals scored. If that’s not a Man of the Match performance from Ronaldo, then I certainly don’t know what that is.

Commiserations to Granit Xhaka and his proud nation that reached the semis of the UEFA Nations League, but it was all about Cristiano Ronaldo, that has guided his nation to yet another final.

Arsenal got off to a fantastic start in the groups winning all of their first three games which included away trips to Qarabag and Sporting Lisbon. Unless they were to go and lose their remaining three games it was highly unlikely they wouldn’t make it out the groups. When Arsenal hosted Lisbon though they drew 0-0 in a tight game. However, Emery’s side did end the groups on a positive note winning their final two matches and finishing top.

It was a very positive group stage for Arsenal as they only conceded two goals throughout. They won five and drew one of their games meaning they also went unbeaten. It was good for their younger players who managed to get game time, with players such as Nketiah and Willock featuring towards the end.

In the round of 32 Arsenal drew BATE Borisov and were away first leg. BATE managed to get a shock 1-0 win in the first leg. Even though Arsenal didn’t manage an away goal they were still favourites to go through. In the second leg, Arsenal won 3-0 and went through to face Rennes in the round of 16.

Again they were away first leg and again lost. Rennes beat them 3-1 and this time it was going to be much more difficult to get through. But thanks to goals from Aubameyang and Maitland-Niles they won 3-0 and 4-3 on aggregate.

Napoli were the opponents in the quarter-finals, a round where many felt Arsenal could get knocked out. A first leg 2-0 home win set Arsenal on their way and in Napoli, a goal from Lacazette ensured the tie was over and Arsenal would win 3-0.

The semi-finals saw Emery face one of his old sides Valencia. Arsenal won the first leg 3-1 and had one foot in the final. In the second leg, it was an Aubameyang masterclass that ensured there was no way back for Valencia. A hat trick from the striker and Arsenal were on their way to Baku after a 7-3 win on aggregate.

Chelsea would be Arsenal opponents in the final. Both sides had already beaten each other in the league this season so it was going to be a tight game. Arsenal were looking to win their first Europa League and Emery’s first, whilst Chelsea had already won one in 2012/13. Arsenal were the better side in the first half but didn’t take their chances. Lacazette had a claim for a penalty and Xhaka hit the bar.

Chelsea came out a different side in the second half and scored in the 48th minute through ex-Arsenal striker Giroud. Pedro doubled the lead on the 59th minute and then Hazard scored a penalty five minutes later. Iwobi gave Arsenal some hope with a brilliant half volley from outside the box. But Hazards second goal, and Chelseas fourth in the match, made sure this was going to be Sarri’s first ever trophy.

It was a disappointing end to what was a brilliant Europa League campaign for the Gunners. They went unbeaten in the groups, turned over two first leg losses and also beat Napoli and Valencia convincingly. But it seemed the final was one step too far and now Emery’s must improve the squad over the summer ready for next season.

Athletes and sports people are at a higher risk of suffering injuries than ordinary people. These injuries range from those caused by sports to others that can happen during exercises. Football has a higher risk of injuries than many other sports. If you have watched it, you may have noticed that the players are very masculine, but they wear protective gear like helmet, joint guards, and gloves.

Fortunately, there is a lot that can be done to prevent these injuries, and this article will cover some of the measures to take to keep them at bay.

Football players are supposed to wear various protective gear whether they are in the real match against their opponents or practicing amongst themselves. Although it may not be necessary, they should also wear the right gear during training that involves extreme exercises. It will go a long way in preventing a number of injuries. Here is the list of protective gear that they should use:

Football is regulated by strict rules that are meant to ensure the safety of the players. Either an individual or team has to observe these rules at all times. The good thing is that they are all aimed at preventing injuries. Upon joining, you will be given these rules, which includes playing without an intention to harm the opponent, wearing the right gear, and many others.

One of the primary reasons why injuries are high in football is that players decide to take a vacations and rest from active life during the offseason. This causes stiffness in the joints and the muscles become dormant.

When the activities resume, this person is more likely to suffer injuries as opposed to someone who remained active. You can still continue using enhancement gear from Steroids Evolution, eat the right diet, and exercise as you wait for football season. Everyone will be amazed by the fitness you have attained when you resume.

Learn to Warm Up Before Exercises

Whether you are in football or any other fitness activity, doing warm-ups before the training starts will prevent injuries in many ways. The muscles require many preparations rather than being indulged in tasking activities all at once. And so are the joints, which are more prone to injuries than any other part of the body. Football is taxing sport and players require extreme workouts to remain fit.

Another paramount way to prevent injuries as a football player is through medical checks. Although reputable teams have dedicated doctors who schedule the check-ups for all players, others do not, and it is the responsibility of the players to do this. Medical checks can detect any challenge or danger early in advance and have it corrected before it escalated during a match.

Now that you have heard the right procedures and tips that prevent injuries in football, it is time to practice them. You will undoubtedly enjoy the results.