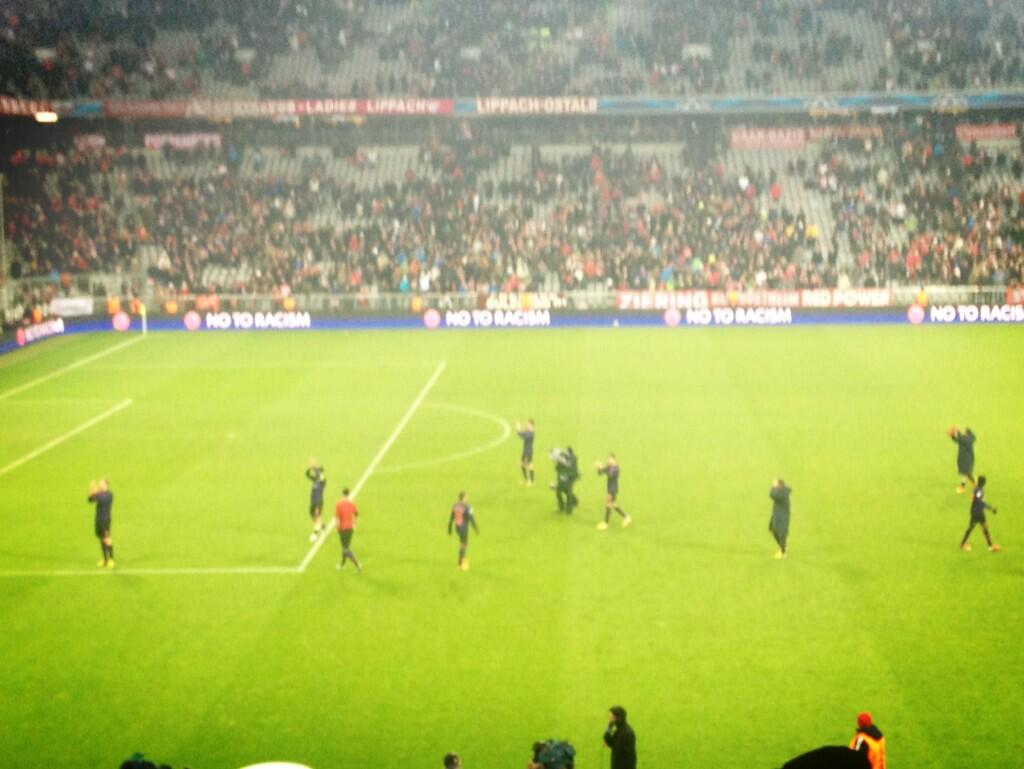 Gunners saluting the away fans

With a fixture against Bayern Munich in mind, Arsene Wenger chose to rest a couple of players which turned out to be his undoing as his second-tier side was ousted from the FA Cup by a lowly Blackburn. The “rested” players took to the pitch against Bayern at the Emirates but the quality of the German side saw them through.

Everyone had written the Gunners off judging from what they had seen in the first leg because they had it all to do against a Bayern side so formidable at home this season. The manager made some changes to his squad with Lukasz Fabianski playing his first game in a year, coming in for Wojciech Szczesny that has been in a poor patch of form recently.

Kieran Gibbs made a timely return from injury as Laurent Koscielny replaced another player in poor form, Thomas Vermaelen. With Jack Wilshere injured, an able replacement, Tomas Rosicky, played in his stead.

The Gunners arrived at the Allianz Arena with a putrid run of three defeats in four so many tipped them to fall by the road side. However, everyone was stunned when Arsenal went off to a flyer with the early goal they craved.

In a swift counter attack, Santi Cazorla fed Aaron Ramsey and the Welshman did well to look up to locate Rosicky. The Czech maestro teed up Theo Walcott which coincided with a slip from David Alaba and the pacey winger drilled a cross through Dante’s legs to the path of Olivier Giroud that finished aplomb.

With Arsenal gaining momentum from that early lead, Mikel Arteta slipped on the turf allowing Toni Kroos to get a chance at goal. The German blasted a shot goalwards but Fabianski made a good save. Kroos was at it again from a Philip Lahm pass but Fabianski was on hand to dive low for another impressive save.

Arjen Robben turned on the style as he waltzed past Walcott before blasting wide. Prior to that the Dutch winger was one on one with Carl Jenkinson in a counter attack and the young fullback did very well to evade the danger. Late on, Per Mertesacker’s poor clearance saw Thomas Mueller get a chance from the right but the side netting spared Fabianski’s blushes.

Kroos got his shooting boots on early in the second half but Fabianski was equal to the challenge yet again. Shortly afterwards, Luiz Gustavo used his left boot to curl the ball at Fabianski’s goal but it missed by a lick of paint.

Mueller executed an inch-perfect back heeled pass that sent Robben on the clear but Fabianski was having a stormer as he kept his footing to make a decent save from the Dutch winger.

Wenger sensed that his side was edging on the game so he brought in reinforcements in the forms of Gervinho and the Ox for Ramsey and Walcott.

Jenkinson drilled a cross into Bayern’s danger area but Giroud lost his balance in the key moment. With Cazorla within proximity, the Frenchman stretched his leg to locate his teammate but his effort was blocked. Bayern was certainly rocked and it was almost two when Gervinho connected with Cazorla with a neat one-two but as expected, his finish was piss poor.

Mueller fired another shot straight at Fabianski but the Polish keeper was taking no prisoners as he made another superb. With Szczesny rested at home due to “mental fatigue”, his compatriot made one hell of a claim for his shirt with this performance.

Late on, the Ox ran at Alaba on the right hand side before winning a corner. Cazorla stepped up to take the set piece and Koscielny rose the highest to head the ball home. At that point in time, Bayern was certainly in bedlam.

The Gunners pushed on for that elusive third goal that would have booked a place in the quarterfinals and their cause was helped when Rosicky was fouled close to the center circle. With Mertesacker and Koscielny covering the entire length of the pitch to expect a lofted ball goalwards, the captain for the night, Mikel Arteta, sent his dead ball into oblivion, and that was pretty much it from an Arsenal perspective.

At the sound of the ref’s whistle, Bayern turned out to be the happier side as the Gunners two-goal victory wasn’t enough to book a quarterfinal berth.

Arsene Wenger hailed his boys and spoke about how he was proud of their performance. He groaned about the timing of the second goal and ran out of superlatives for defense. On his bit on the defense, I concur – Mertesielny were rocks at the back and their fullbacks balanced their offensive and defensive plays admirably.

The media continued to barrage the manager with questions, on leaving the Verm out, no English team in the quarterfinals and most importantly – if Fabianski will become his No. 1. However, Wenger made it obvious that he still favors Szczesny,

You are never No 1 forever and you are not on one game as well. He did well and you can only congratulate him.

Let me put this straight – I’m a big fan of Wojciech Szczesny. His stellar performances of the 2010/11 season earned him the No. 1 jersey and he did pretty well last season but when Wenger lacked trust in his deputies to the extent of playing Szczesny in cup matches, he became complacent.

This season, he has committed some errors that made his team pay and I’m in no mood to start mentioning those specific games. In my honest opinion, I would like Fabianski to get a run-out in the team to prove to Szczesny that he’ll need to step up to win his place back in the team.

There’s no question of who the better goalie is here but Szczesny needs some rest after a prolonged run of games. Fabianski did alright for someone who’s hardly had a game this season.

In defense, Kos the Boss played superbly – Vermaelen, take a seat. Ze Big Friendly Giant was more or less reliable on the night, Jenkinson played with a hell lot of heart and did well to cover and throw Robben off. Gibbs showed why he’s been sorely missed.

In midfield, Ramsey misplaced a couple of passes but as usual, put in a great shift. Arteta, unfortunately, committed some needless stupid fouls that cost us precious time but he did really well. TR7 looked very rusty and just needs more game time. He’ll be crucial now since Jack’s injured.

In attack, Walcott, aside from his pass which led to the goal, was pretty ineffectual, Cazorla did alright and couldn’t get out of tight situations like he usually does. Giroud scored the early goal we craved, did well getting stuck into the Bayern defenders and I’m proud of him for giving us hope. It was also good seeing him end his goal drought.

Ox did great in winning the corner which led to Kos’ goal. Gervinho, if he had scored, I’d forgiven him for being, relatively useless. Many Gooners on my TL were saying that he “did okay” but that’s what you’d get from Gervinho nowadays – “okay”.

Just a slight pity we didn’t have Jack tonight. Might have just given us that something special. His drive from midfield would have been a thorn in Bayern’s flesh.

For the eighth season in a row, the Gunners trophy drought continues.

For what it’s worth, this is the kind of performance that can spur the Gunners to surge for that coveted top four finish but you can never know what Arsenal has up its sleeves. This is the club that will beat Bayern away and lose to Blackburn at home.

Let’s hope for a Bayern-esque performance against Swansea. We will surely get three points if we play that way.

Besides, revenge is a dish best served cold and it would be nice to make them pay after we were Michu-fied at the Emirates.