Q & A with Ivan Gazidis: Thoughts, Opinions and Hopes for the Future 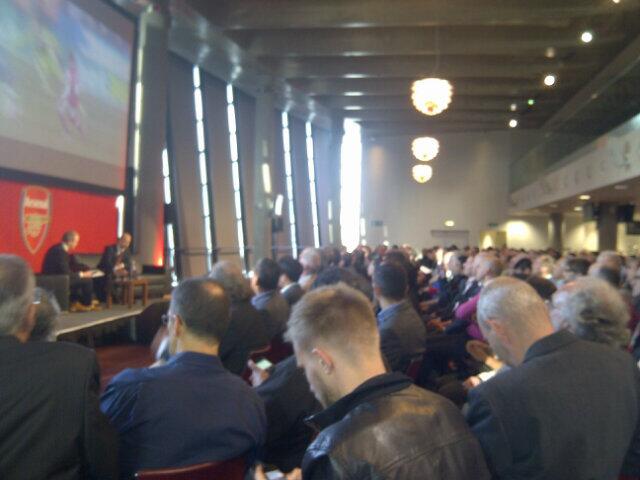 Thoroughbred Gooner, Tim Payton, sharing a photo of the Q and A session

With the season done and dusted, transfer speculation and international fixtures have taken center stage with the media Vultures and their keyboard warriors linking Arsenal with several intergalactic players all over the Milky Way.

With deadwood like Andrei Arshavin, Denilson and Sebastien Squillaci shown the exit door, it is believed that a whooping £180,000 in wages has been freed up and hopefully, it would be reinvested into the squad to those that actually deserve pay-rises.

Prior to yesterday’s annual Q and A session, Arsenal’s Chief Executive, Ivan Gazidis, spoke about how the club was beginning to reach the upper echelons in flexing its financial muscles, as the club has always been on spotlight for its thrifty nature in the transfer market. He boldly spoke about the club’s transfers, competing with the juggernauts of European football, winning trophies, changing the wage structure, Arsene Wenger’s future and of course, that epic quote about breaking bank to sign Shrek.

“Of course we could do that, we could do more than that. We have a certain amount which we’ve held in reserve. We also have new revenue streams coming on board and all of these things mean we can do things which would excite you.”

Even if it sounded cliche, the Chief Executive blew his horn about how money was available for the manager, how the manager had the full backing of the Board to make those moves that would benefit the club in the short and long-term, how the club longed for trophies and the whole nine yards.

The recent chain of events from the Arsenal hierarchy also showed how things have improved massively from a financial perspective. The Emirates deal was renewed, some more business was conducted with those chums from the Far East, the potential bumper kit deal with Puma (hoping for Nike to match the bid) and of course, the coffers still overflowing with profits from the past.

All these set the tone for the Q and A session that was chiefly focused on the club’s finances, that has become the talk of the town.

With a Gooner like me chilling in Lagos, Nigeria, there was no way in Hell I could attend the Q and A session, even if I wanted to borrow a flying broomstick from those world-famous witches in Swaziland that have been banned from flying over 150m above sea level.

However, I monitored the Q and A from Twitter with Gooners like Tim Payton, DarrenArsenal1, Le Grove, Gingers for Limper and Andrew Allen providing live updates as the event progressed.

Gazidis confirms that Arsenal will have revenues of £300m per annum come 2014. Huge financial capability & will compete at top level again

With revenues of the astronomical amount stated above, it’s not hard to dare to dream this time. This also means that the club won’t have any excuses when they will be faced in paying huge transfer sums for players that will improve the squad. I know that we live in a world where you pay £35m for Andy Carroll and £50m for Fernando Torres but to buy a quality striker like Gonzalo Higuain, you’d have to break bank, and it’s heartwarming to know that Arsenal is capable.

This transfer epitomized Arsenal as a “selling club”, and it was really painful seeing Robin van Persie seeking greener pastures in the red half of Manchester. He went on to win the Premier League and while many fans feel he was “vindicated” for securing a move away from the Emirates, I’ll let you know when I give two fledgling _____ (fill in the blank).

Interesting times ahead as Gazidis says Wenger preference for paying all players similar wages has to change. Can Wenger adapt to new era?

This is really interesting because I really can’t see how Wenger wants to change from his current style of paying his players similar wages. When a certain Olivier Giroud’s salary is in close proximity to a wasted Marouane Chamakh, it would take some stuffing to change this approach in a club like Arsenal.

Top earners like Theo Walcott, Lukas Podolski, Mikel Arteta and Thomas Vermaelen all earn salaries that are within the same range, and judging from their performances this season, it’s fair to say that they deserve to be in the same range (bar Vermaelen, that had a stinker this season. However, his performances in the past earned him a mega pay-rise that puts him in parity with this lot).

'We look at talent first, wages second. Arsene decides talent. He decides if we keep that top talent, we pay market rate.' really…

That’s part and parcel of his job and while there have been times he struck gold with some, there have been others where he was better off shooting his foot with a rifle. In simpler terms, for every Santi Cazorla, there’s a Gervinho and for every Laurent Koscielny, there’s a Seb Squillaci.

In terms of the “market rate”, it’s fair to say that Arsenal made an absolute bargain with the acquisition of Cazorla and he was a revelation since joining the club. For players coming from different footballing cultures, Podolski and Giroud did pretty well in their debut campaigns but more will be expected of them next season.

Despite playing second fiddle to Jens Lehmann when he arrived at the club, Manuel Almunia worked hard to displace the German before allowing complacency to creep into his game when he realized that Lukasz Fabianski offered no threat. As the years went by, Almunia’s form waned and he became a liability to the team but he preferred to sit on the bench and collect his salary till his contract expired. The same can be said above Arshavin and Squillaci last season.

Players like Nicklas Bendtner, Carlos Vela (before he was sold), Denilson (before his contract was rescinded) and more recently, Andre Santos and Marouane Chamakh earn big greens from the Gunners, but they plied their trades at different club and a part of me strongly believes that Arsenal pays a considerable chunk of their wages throughout the duration of their loan spells.

This trend has to stop and I strongly believe that Gazidis will put his money where his mouth is on this issue.

Feel free to check out the Twitter timelines of Tim Payton, DarrenArsenal1, Le Grove, Gingers for Limper and Andrew Allen to review more on the Q and A session with Ivan Gazidis.

If there’s any season Arsenal has to challenge for the Premier League title, it has to be this campaign with the three teams above them going through transitional phases while the Gunners’ stability remained intact. Gazidis has preached about how much money the club has in its coffers and chunk of it has to be directly invested in the club if we want to see progress.

The media Vultures have done their bit to create a host of articles linking the Gunners with some players that would add some value to the squad and I sincerely hope that Wenger would have the balls to make those bold moves in the transfer market.

With Fabianski’s future on the balance, his mind is probably made up with plans of getting regular playing time elsewhere, so the Gunners have to find a goalie that would give Wojciech Szczesny a run for his money because thoughts of Vito Mannone in goal are no different from thoughts of seeing Freddy Krueger in your dreams.

With an experienced head like Julio Cesar linked with the club, I’ll be glad if the Gunners make a punt for the shot stopper, as he would be there to provide some guidance to Szczesny that is touted as Arsenal’s custodian between the sticks for years to come.

In defense, the Gunners need to hold on to the French duo of Bacary Sagna and Laurent Koscielny, as well as bringing in a commanding center back like Swansea’s Ashley Williams. Having four quality center backs will definitely give the boss some selection headaches but that competition will bring out the best in all four center backs, as the duel between Nacho Monreal and Kieran Gibbs has proven.

The Gunners are blessed with a vast array of midfielders but it’s high time Arsene Wenger opts for some muscle, tenacity and doggedness in the middle of the park, as age is slowly creeping in on Mikel Arteta. The Spaniard did a stellar job in his debut campaign as a holding midfielder but the Gunners need a rugged defensive midfielder that would be the water-carrier of the team.

In attack, I can look no further than Gonzalo Higuain. The Argentine goal-getter has been stunningly consistent smashing in 107 goals in 187 league games for Real Madrid. According to stats king, Orbinho, Higuain had a chance conversion rate of 43 percent in the 2011/12 campaign and 32 percent in the 2012/13 campaign. The average Premier League striker amasses only 16 percent.

With Giroud and co. missing some shocking chances last season, I’ll invest some smart money on the Argentine poacher that has announced that he intends to leave Madrid after playing second fiddle to Karim Benzema all season long.

The summer is young.

Take a bow for Ivan Gazidis that has shared his thoughts and opinions, while we all hope for the future.