← BATE Borisov 2-4 Arsenal: Wenger Makes Good Use of Squad Depth
Thoughts on Szczesny, His Shades at Arsenal, and the Goalkeeping Situation →

Thoughts on the Season So Far 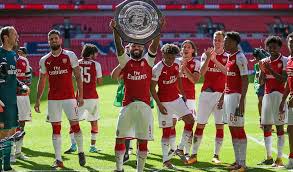 As we head into another international break, it’s time to take stock and review how the season has panned out so far.

The early summer signing of Alexandre Lacazette was certainly a step in the right direction, and we hoped for a bit more, but it’s fair to say the Alexis Sanchez saga was rather messy, even though he remained with the club and is odds on to leave on a free transfer next summer, with Mesut Ozil and maybe Jack Wilshere. Some would have felt the club could have invested on more talent, but the acquisitions of Lacazette and Sead Kolasinac have been worth their weight in gold. Arsene Wenger still has time to access the squad, but we all know he’s not a fan of the January transfer window, so we will have to make do with the squad as it is.

In terms of competitions, the team began the campaign well with winning a couple of preseason tournaments and the Community Shield against last season’s champions, Chelsea, but the start to the new Premier League campaign was an aberration with losses to Stoke and Liverpool following a nervy opening day victory against Leicester. Since then, Wenger has steadied the ship with impressive wins over West Brom, Brighton and Bournemouth, as well as a creditable draw at Stamford Bridge. The aforementioned wins against the likes of WBA, BHA and Bournemouth were rather expected, but following the team’s performance at Stamford Bridge in recent seasons, getting a draw, especially playing the way they did on the night gave the fans a good feeling. The Europa League has offered a new adventure, and the manager has been able to use the depth of his squad to good effect, gaining six points from a possible six. The young guns also put up a great shift in the Carabao Cup tie against Doncaster.

Injuries have taken their toll this season with the long term absentee, Santi Cazorla, still recuperating from the plethora of surgeries he had on his tendons. Jack Wilshere had his own injury concerns at the start of the season but he has come stronger with some very impressive performances in the minutes he has been afforded this season. Mesut Ozil seems to be the latest player struggling with injuries but hopefully, he will shake them off before the international break closes.

On individual performance, Nacho Monreal has to me, been the most outstanding player, continuing his consistent performances week in, week out. Lacazette has settled to live in North London, scoring a host of goals at home, and like Harry Kane, we will be hoping he can start banging them in on his travels, starting with Watford at Vicarage Road. Alexis Sanchez is slowly coming back to his best form and I’m pretty sure he will get better with games.

Let’s just hope all players will return from the break unscathed.

← BATE Borisov 2-4 Arsenal: Wenger Makes Good Use of Squad Depth
Thoughts on Szczesny, His Shades at Arsenal, and the Goalkeeping Situation →