Arsenal 2-1 Brentford: Gunners Get the Win Their Performance Deserved

With West Ham dropping points earlier against Newcastle thanks to Arsenal agent, Joe Willock, the onus was on Arsenal to close the gap with what was expected to be a routine win against Brentford. The Bees had lost four of their last five games coming to the Emirates, and there was also revenge expected on the cards, with Arsenal losing this fixture in August. For those that can clearly remember, the losses to Brentford, Chelsea and Manchester City rooted Arsenal to the bottom of the table, and it was a very sorry sight for everyone associated with the club.

Arsenal began like a house on fire and pressed hard with the attacking quartet working together and with fluidity but the Brentford rearguard held their own. Arsenal kept probing and eventually found the back of the net when Alexandre Lacazette smartly converted a cut back but the assistant referee’s flag spared Brentford’s blushes. Despite Arsenal having the lion’s share of possession and goal attempts, it wasn’t still enough, as Arteta’s men went into the break level on points.

The Gunners began the second half with the same energy and assertiveness to instill their dominance on Brentford, and finally got the goal their play deserved following some individual brilliance from the ever-impressive Emile Smith-Rowe. The young Gun took the ball on his stride, took on all comers before slotting the ball coolly past David Raya in the Brentford goal, sending the entire Emirates Stadium into raptures. 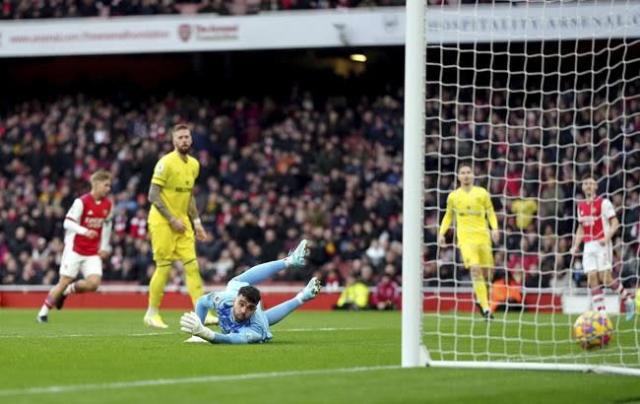 That is Smith-Rowe’s 10th goal of the campaign, his highest in his career, and when you think about the fact that he has lost his place in the team to Gabriel Martinelli, you can imagine what the manager is going through, having two excellent players vying for the same spot at the left wing of attack. Smith-Rowe’s finishing has massively improved and Arsenal has a #10 they can be truly proud of.

After basking in the euphoria of finally taking the lead, the next line of action was to extend it, because in all honesty, despite the lead and domination displayed by the Gunners, they seemed to be just one mistake or opposition chance away from messing it all up. This moment almost arrived when the ball was sent in-behind Gabriel, that had lost track of the forward he was marking, Bryan Mbeumo, but luckily for the Brazilian defender, the French forward activated his inner Lukaku as first touch let him down and the ball crept into Aaron Ramsdale’s path.

Arsenal put some daylight between them and their visitors when Bukayo Saka received a carefully threaded ball from Thomas Partey, picked his spot, and launched a surface-to-goal piledriver, leaving Raya with no chance to execute a save.

2-0 up, three points sealed and what was expected from Arsenal was to just see the game out, with minutes to spare, but as expected, Brentford managed to get one back with a bizarre goal that saw pandemonium in the box, some pinball ricocheting off Cedric Soares’ body with Christian Norgaard firing the ball to an unguarded net. Due to the eonn kl s it took the VARs to decide whether it was a goal or not, there wasn’t much left in the game to play, with the referee’s whistle sounding like sweet music to the ears of everyone concerned with Arsenal Football Club.

This win is more than welcome, and we would expect more of the same when Wolves come to town on Thursday.

Till then, have a splendid Sunday.