Eddie Nketiah was a subject of rife speculation following the completion of this campaign, as his contract was up for expiration at the end of the current season alongside Alexandre Lacazette. Arsenal had turned down a bid for Eddie Nketiah from Crystal Palace this season, and they were among the teams that lurked like wolves on the prowl, hoping to obtain his services on a free contract.

The English forward had been used to great effect in the Carabao Cup this season, scoring five goals in the first rounds of the competition, then lost his place to Lacazette in the semifinal double header with Liverpool. He had featured sparingly in the Premier League, as he was further down the pecking order to Pierre-Emerick Aubameyang and Lacazette. However, Nketiah got his big break towards the end of the season, starting Arsenal’s last eight matches in a row, scoring five goals. The goals were instrumental in Arsenal’s surge for a fourth placed finish, but the Gunners fell short, with losses to Newcastle and Spurs. 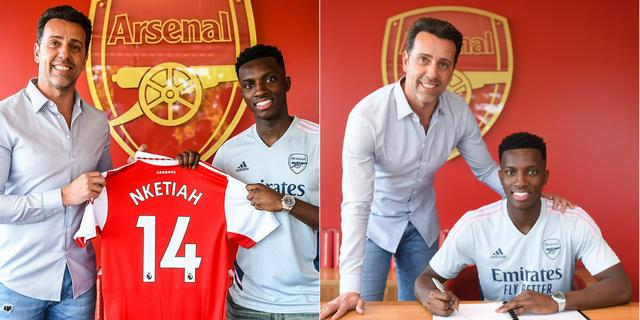 Arsenal has finally confirmed that Nketiah has signed a new deal with the club, extending his stay till 2027. His manager, Mikel Arteta, was excited with the forward’s contract extension,

“I’m delighted Eddie is staying with us. He represents what we are all about and all the values of the club. We are very happy that he has extended his contract and now we have to get to work and continue to develop the great talent and person that we have in him.”

The club’s technical director, Edu, had some encouraging words as well,

“The foundations of this squad are built on young talent and in particular those who have come through our Academy system. Eddie was released by another club as a young man but has always shown he has the attitude as well as the ability to become a top player. The fact he’s signed a new contract is an important part of our squad planning for next season and we’re all delighted.”

Nketiah’s new bumper contract has seen him change his jersey number to the iconic #14 jersey, donned by legendary goal scorers like Theo Walcott, former captain, Aubameyang and the greatest Arsenal player of all time, Thierry Henry. This jersey also brings Nketiah closer to the first team, as his relevance increased in the tail end of the campaign as he proved that he could be a dependable goal scorer when offered the chances.

Arsenal is strongly linked with a move for Gabriel Jesus, and he would certainly start ahead of Nketiah, but the Gunners have a forward that can come on the pitch and make a difference, as well as add depth, with the Europa League which would be a grueling factor this season. Should the Gunners complete the signing of Gabriel Jesus, the Brazilian forward would be expected to feature consistently in the Premier League, while Nketiah would get the nod in the Europa League, Carabao Cup and FA Cup.

Good to have you, Eddie.