So its now public knowledge that Chelsea’s Brazilian maestro, Willian, is leaving the club after over 300 appearances in seven seasons with the Blues. He also managed to amass some silverware with the London-based outfit, winning two Premier League titles, one FA Cup and last season’s Europa League following their victory against yours truly in Baku.

At 32, you would expect that his last major contract would be in some retirement league, but all indications show that Willian is about to join Arsenal on a three-year deal, which is going to bring up some mixed emotions among the Arsenal faithful.

Many would look at the talent coming into the Chelsea team and see why there’s no more room for a talented individual like Willian in their side, but in all honesty, I believe that he will be a welcome addition to Arsenal and I will share my reasons. Firstly, Willian will give us some much needed depth and quality in attack as last season showed that we were heavily reliant on our dependable captain for the goods, and even though he always delivered, the supporting pack should have done better. Willian is the kind of guy that averages 10 – 15 goals per season from midfield, and that’s a big plus in my books. Another exciting reason for having Willian in our ranks is the fact that he can cut in from the left hand side of our attack, allowing Aubameyang to play through the middle. He’s also versatile enough to play on the right or in the attacking midfield slot. That’s the kind of versatility that modern day coaches dream about.

We also have to consider the fact that he’s an experienced individual that has seen it all, so it can only rub off on the younger wingers in the squad like Bukayo Saka, Reiss Nelson and Nicolas Pepe. Having a figurehead like Willian in the dressing room can only aid their development even further.

Then there’s the financial implication of the transfer – Willian will not cost the club any transfer fees if he joins the club. It will just be the issue of his salary that can certainly be sorted out with mininal fuss. The COVID-19 pandemic has affected lives and businesses adversely, with Arsenal even confirming that they are going to lay off 55 employees, getting a talented and experienced footballer for free serves as a good business decision.

Well, its all speculation till we get the official communication but I’m certainly a staunch member of the Willian-In brigade.

What a brilliant finisher!

Arsenal went into the FA Cup final against Chelsea knowing that anything less than a victory would be more than enough to grant them passage to the Europa League, a competition that the Gunners featured for three consecutive seasons. They came up against the same opponents in the finals of the competition last season, but Eden Hazard was in the form of his life as Chelsea tore Arsenal apart. thereby blowing the Gunners’ chance of featuring in the Champions League.

With the way the Gunners began the campaign under Unai Emery up until his unceremonious departure in December 2019, it’s fair to say that the FA Cup was the one competition that Mikel Arteta had his full grip on, starting with the narrow win over Leeds United, before the away win at recently relegated Bournemouth. This followed a routine win against Portsmouth and Dani Ceballos inspired a late winner against Sheffield United leading the Gunners to Wembley against the FA Cup defending champions and sure-fire favorites, Manchester City. That was one of the most disciplined performances I witnessed from the lads and Pierre-Emerick Aubameyang’s sheer class proved to be the difference in just his first FA Cup this season. Cometh the hour, cometh the man, I guess.

The FA Cup final match against Chelsea was expected to be an intense affair, bearing in mind that they white washed the in-form Manchester United to earn a place in the finals. Arsenal and Chelsea met in the same round three seasons ago with Per Mertesacker playing with what proved to be his best match in Arsenal colors that afternoon. The Gunners didn’t have the most auspicious of starts with Olivier Giroud being the scourge yet again with a neat flicked pass to Christian Pulisic that saw the swift winger waltzed past his man before side footing the ball past the onrushing Emiliano Martinez. With just six minutes gone, Arsenal were on the back foot.

Conceding that goal also took the winds off the sails of the Gunners with Chelsea on the ascendancy in the early proceedings but if you watched Mikel Arteta’s tactics in recent games, there has been one consistent move where Kieran Tierney loops the ball into space to allow the captain use his blistering pace to great effect. It provided a goal in the semifinals against Manchester City and it proved to be vital yet again, as Tierney sent Aubameyang through with the same ball, leading to a contest between Auba and Cesar Azpilicueta which ultimately saw the experienced defender concede a penalty for infringement. Despite VAR’s best efforts to probably prove otherwise, the penalty decision stood and Aubameyang finished with aplomb. 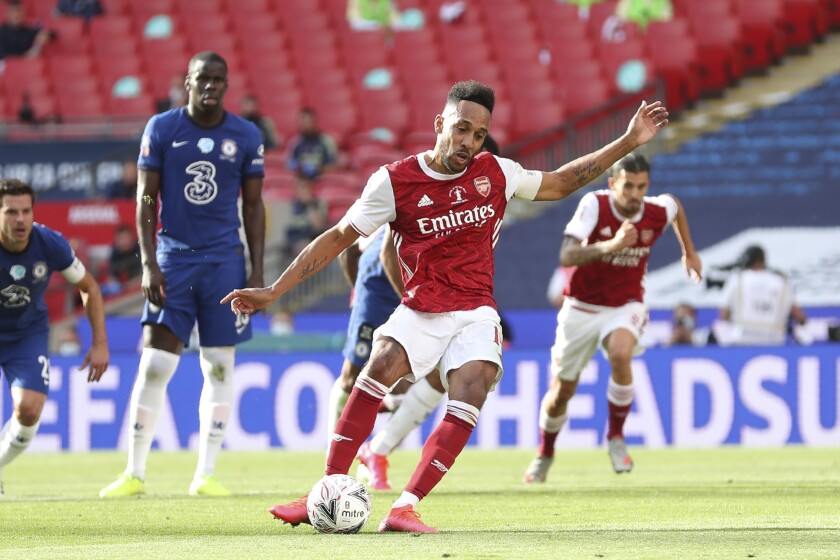 That goal brought life back to Arsenal’s FA Cup campaign but the disappointment of conceding to Arsenal turned to despair when Azpilicueta pulled up short when chasing for the ball, leading to lengthy treatment and his eventual substitution with youngster, Andreas Christiansen, coming on to replace him. Chelsea had more injury concerns at the start of the second half with Pulisic also pulled his hammy as he attempted a sprint, and with Will.i.an having his own injury problems, Pedro came on to replace Chelsea’s live wire.

That didn’t matter to the Gunners as Aubameyang scored his second goal of the match, which I must say, was sweeter than the sweetest thing I could ever think of at that frigging moment. After receiving the ball from Nicolas Pepe on the right, he shimmed past his marker and dinked a sumptuous ball past a hapless Willy Caballero. The acrobatic celebrations were on show and Arsenal was truly in control of the contest. Their cause was helped when Mateo Kovacic earned an early bath for his tackle on Granit Xhaka. Both lads were combative all game long but Kovacic was on the end of two bookings from infringements on Xhaka, leaving the ref no choice but to do the needful. The Chelsea horror show continued when substitute, Pedro, landed awkwardly and injured his shoulder, which led to a very lengthy treatment and stoppage time as he had to be stretched off.

The ref’s final whistle was like music to the ears of Mikel Arteta, the players and the fans watching worldwide, as their heroes won their 14 FA Cup, making Arsenal the undisputed kings of the competition. Hell, they even inspired me to write my first blog post in the best part of two months, and I hope to remain consistent in the coming days and weeks.

As expected, Arteta waxed lyrical about his captain and even bantered him about his goofy moment when the trophy fell off his hands. At least, I don’t think there will be any bus parade, so Aubameyang will not have his Sergio Ramos moment to drop the trophy under the team bus.

Everyone associated with Arsenal is rightly proud of Mikel Arteta at this moment, as he joins the league of extraordinary gentlemen that have won the FA Cup as a player and manager. More importantly, this is a real silver lining at the end of what has been a very dark season. Started terribly, failed woefully in the transfer market and finished in our lowest position in many years. However, we can look back on this season with some restored hope that things can get better again, if we do the important things like somehow convincing Aubameyang to remain at the club, getting rid of the deadwood and doing the right business in the transfer market.

With the games coming thick and fast, there was no time to sulk over the draw against Sheffield United last weekend, as the Gunners arrived at Stamford Bridge, 10 points behind the inconsistent Chelsea. Both teams were in a poor vein of form and someone joked that it was the kind of game that both of them could actually lose.

There was some concern around the inclusion of Shkodran Mustafi in the starting lineup for the second league match in a row, because with Mustafi, you would always expect a calamity as he is a ticking time bomb waiting to explode, and we got just that when the German defender gifted the ball to Tammy Abraham, putting his team on the lurch. David Luiz, that was jeered by the home crowd all game long, tried to cover his defense partner’s mess but a late tackle on the Chelsea forward that earned him his marching orders.

Jorginho stepped up and dispatched the penalty aplomb.

As you’d expect from a team with a man down, Arsenal was on the back foot with Chelsea on the ascendancy but it’s worth noting that Granit Xhaka dropped deep as an auxiliary center back and became a colossus in defense. Against the run of play, Arsenal grabbed the equalizer when Gabriel Martinelli latched onto Mustafi’s headed clearance from a corner kick, made a 67-yard dash that coincided with a hilarious slip from N’Golo Kante before coming clean on goal and side footing the ball past Kepa Arrizabalaga in the Chelsea goal.

The game was delicately poised with all three points there for the taking, Chelsea must have thought that they had done enough for a victory when Cesar Azpilicueta guided the ball home from point blank range with all the Arsenal defenders ball watching, but Hector Bellerin salvaged a point for the away side when he showed great determination to swing a hopeful left footed effort that somehow found its way past Kepa. The away team didn’t care about the nature of the goal, but snapping a draw from the jaws of defeat when you’re 10 men down is very commendable.

Arsenal manager, Mikel Arteta, spoke about the spirit and commitment from his team with their backs against the wall. Equalizing twice in an away ground with a deficit is no mean feat, and I am proud of the lads for the performance they put up.

All focus will be moved to the Bournemouth game in the FA Cup, as the Gunners will feature without their most improved defender, David Luiz, following his red card. No thanks to Mustafi.