← The Timing of Welbeck’s Injury is a Cause for Concern
Stoke Preview: Team News, Injury Updates and Predicted Lineups →

A Quick Roundup of Gunners on International Duty

The thing about international football is that it comes with its own fair share of rewards, as several nations of the world battle each other to earn places in their respective tournaments. At Nigeria, we were at the dawn of a new era as Sunday Oliseh got a taste of the big time, leading his country to Dar Es Salaam to take on Tanzania. As expected, he brought in a new look side with a lot of unknown figures but there was no cohesion in their play and the 0-0 draw was welcome in all honesty. There was also a debut for Wolves goalkeeper, Carl Ikeme, and he put up an awesome performance in his first Nigerian cap.

Great honour to make my debut for the @NGSuperEagles . Thanks to my family, friends and fans for your support ❤️🙌🏾

Moving over to the Gunners, a couple of Arsenal’s contingent featured in the first phase of fixtures and thankfully, there was no injury. Here’s a quick roundup of all the Gunners that featured for their respective nations.

Kieran Gibbs, Alex Oxlade-Chamberlain and Theo Walcott were called up to the England squad for their qualifiers against San Marino and Switzerland. While Gibbs spent the entirety of the game on the bench, the Ox played 67 minutes and provided a cross that was converted by Ross Barkley. Walcott replaced the Ox with nearly half an hour to go and scored his sixth and seventh international goal for England in the 6-0 rout of San Marino. Walcott’s first goal was quite easy for his high standards, latching onto a Fabian Delph drilled effort to place the ball into an unguarded net. His second of the night was relatively easy as well, placing the ball to the keeper’s far corner.

This win ensured that England continued their 100 percent record in the group, amassing 21 points from seven games. In this run, they have scored 24 and conceded just three. Rooney also achieved a personal milestone of matching Sir Bobby Charlton’s long-standing record of 49 international goals for his country. Coincidentally, Rooney also matched the record in the same number of games, 106, that it took Charlton to achieve the feat.

You can watch the highlights on the YouTube clip below

Gabriel Paulista was an unused substitute in Brazil’s narrow win over Costa Rica. Joel Campbell came on as a substitute in the 61st minute for Marcos Urema. The only goal of the game arrived through some determination from the Hulk as he raced to a ball that was ahead of him, used his strength to bully a defender before placing it past the goalie. 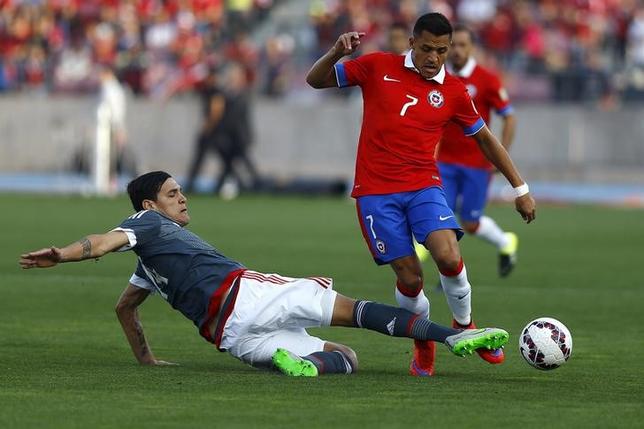 Alexis in action for Chile.

In an entertaining showpiece at the National Stadium at Santiago, Chile hosted Paraguay in an exciting encounter that was filled with goals to give the fans their money’s worth. Felipe Gutierrez opened the scoring with a cheeky lob early on, but his effort was cancelled by Jonathan Fabbro. Jorge Benitez gave the visitors a surprise lead with a brilliant header but Gutierrez brought the home team on level terms again with a perfectly-executed finish after some great team play. Alexis sealed the victory late on with a neat finish from less than six yards out.

Santi Cazorla was left on the bench in Spain’s narrow win over Slovakia but he replaced ex-Gunner, Cesc Fabregas, in the 67th minute. The opening goal was scored by Jordi Alba as he drifted into the danger area unmarked and used his head to convert a sumptuous diagonal pass from David Silva. Andres Iniesta converted a spot kick to double the home side’s advantage.

Slovakia was leading Spain with three points coming into the game but the Spainiards as currently level on points with the Slovaks and they also boast of a better goal difference.

There were some pre-match pleasantries exchanged between Mesut Ozil, Lukas Podolski, Wojciech Szczesny and Lukasz Fabianski when Germany hosted Poland but when it was time for the real business, Mesut Ozil played 90 minutes as Germany rose to pole position in their group with a priceless victory over Poland.

Ozil in action for Germany

Mueller showed great off the ball movement to evade his marker and latch onto a cut back to fire a low drive into an unguarded net as Fabianski tried to anticipate the ball from the bloke that made the assist. Fabianski would be disappointed for the second goal he conceded, as Goetze’s shot crept past him at his near post. Poland skipper, Lewandowski, tried to claw his team back into the game with a reduced the deficit with a classic diving keeper that was too hot for Manuel Neuer to handle. The Bayern goalie had a hand to his club teammate’s header but it still crept in. Fabianski was at fault yet again for the match clincher as he used his feet to deflect Mueller’s shot straight to Goetze’s path to allow the midfielder have the easiest of tap ins.

Germany’s win propelled them to top spot ahead of Poland. The gap now stands at two points between both nations.

Bacary Sagna started ahead of Matt Debuchy while Olivier Giroud came on in the dying minutes as France stole a narrow win over Portugal. The undoubted Man of the Match was Laurent Koscielny who had a stormer at the back.

The only goal of the game arrived quite late but it was worth the wait. A perfectly-executed free kick by Mathieu Valbuena.

Francis Coquelin hopes to play for France someday and if he keeps up his form, he could be in contention for a place in the squad this summer.

Ramsey played all 90 minutes for his country as they edged closer to Euro 2016 qualification with another narrow victory over Cyprus. Gareth Bale scored the only goal of the night late on with a powerful header from a great cross.

Wales remain unbeaten in the group and are three points ahead of Belgium.

Petr Cech led his nation to a victory over Kazakhstan but they had to fight really hard for the win and all thanks would go to Milan Skoda for his brace on the night. The visitors took a surprise lead through Logvinenko that guided the past past Cech with a point blank header. Skoda equalized for the hosts with a header of his own and he scored the match winner with, err, another header!

Petr Cech has stated that it would be special for him if his nation qualifies to the Euros next summer. The goalie has featured at Euro 2004, 2008 and 2012 and says he is determined to help his nation reach next summer’s tournament.

So far, there have been no injuries and I hope the Gunners would go through the second set of fixtures unscathed.

← The Timing of Welbeck’s Injury is a Cause for Concern
Stoke Preview: Team News, Injury Updates and Predicted Lineups →