Has Ramsey’s Criticism this Season been Deserved? 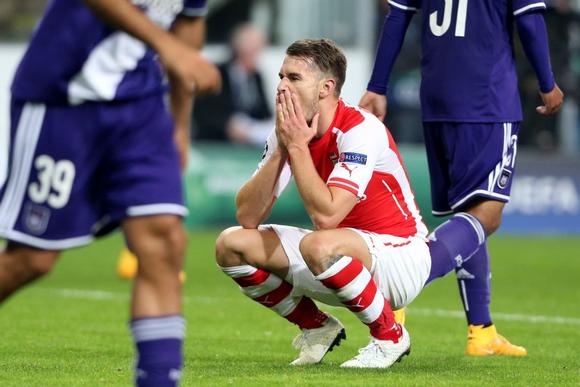 Permit me to take you down memory to a famous evening at Wembley. After Santi Cazorla and Laurent Koscielny had played their roles in clawing the Gunners out from the embarrassing jaws of defeat, a moment arrived deep into extra time that sent all Arsenal fans worldwide to raptures. The silky Olivier Giroud noticed a player making one of his trademarks late surges into the box and he executed a neat back-heeled pass that was poked home by Arsenal’s undoubted player of the season, Aaron Ramsey.

With his highest ever goalscoring tally at club level, Ramsey ascended from being a frustrating player to watch (remember 2011/12 season?) to being the next best thing against Arsenal. He was the epitome of everything good at the club and many Arsenal fans even say that if he had remained fit all season long, they might had won the Premier League. That’s a justifiable claim bearing in mind how he performed in the 2013/14 Premier League.

Funnily enough, it wasn’t just the goals that epitomized Ramsey’s scintillating form for the club last season. Ramsey’s 2013/14 stats (via WhoScored) were been jaw-dropping to say the least.

With the fitness levels of an Ox, Ramsey played Arsenal’s first 18 games in the Premier League, notching up eight goals and six assists. In these 18 games, Arsenal amassed 12 wins, three draws and suffered three defeats. Ramsey missed out on Arsenal’s remaining 14 League games and in his absence, the Gunners had eight victories, three draws and suffered three defeats which include those humiliating results against Liverpool and Chelsea.

This showed that the Gunners had a 66% win ratio in the Premier League when Ramsey took to the pitch but had a 57% win ratio while he was at the treatment table.

He made his return in a brief cameo against West Ham and after getting some extra games under his belt, Ramsey scored Hull twice (Premier League and FA Cup final) as well as a wonder strike against Norwich in the final league game of the season.

With Wales not qualifying for the World Cup, Ramsey watched his teammates in the soccer fiesta and was certainly happy for the likes of Mesut Ozil, Lukas Podolski and Per Mertesacker that came back home with the trophy.

Things were expected of him in the new campaign and Ramsey obliged with a Man of the Match performance in the FA Community Shield against Manchester City, where he notched up a goal and an assist. He was Arsenal’s savior yet again in the curtain raiser against Crystal Palace then he earned himself a foolish red card in the qualifier against Besiktas. Many Arsenal fans fretted at the prospect of missing Ramsey for the vital second leg at the Emirates but Alexis Sanchez turned up on the night and never looked back.

Ramsey made his return in the League with a late goal against Everton and he created a neat assist for Jack Wilshere against Manchester City before suffering a hamstring injury in the North London Derby. Since then, Rambo’s form has been downright erratic for a player of his high standards. His blood-like thirst for goals has seen him drift away from performing his other essential duties on the pitch and with the likes of Mikel Arteta and Mathieu Flamini not getting enough ‘assistance’ from Ramsey, they have been left exposed countless times and in most cases, Arsenal ends up conceding a goal.

At some point, Ramsey lost his place in the team due to his fitness issues and / or bad patch of form. Sadly, he continued his wretched run with another uncharacteristic torrid outing against Swansea and he was eventually substituted.

According to the Daily Mail, Ramsey has hit back on the fans that have criticized his form, labeling it as ‘unfair’,

‘I’m not worried. I know my qualities. ‘I’ve had a few injuries this season and I’m just getting back. To be honest, I’m still not 100 per cent physically there. It does take a bit out of me.

‘It will take me a few more games to be back to my best. I’m not worried. Certain criticism from people is unfair.’

Ramsey, like a couple of his teammates, is currently going through a rough patch and for a player of his caliber, I’d say that the criticism he has received has been deserved. Criticism is a honest way to letting an individual know how you really feel about him and you don’t need any soothsayer to tell you that Ramsey isn’t playing well at the moment.

Is there something that can be done about it? Yes!

As Wenger advised, Ramsey needs to go back to the basics to do his primary job as a midfielder. We live in a world where attacking players are judged by the goals they score but sometimes, those aren’t the stats we need to be bothered about. Last season, Ramsey was a growing influential figure within the team and his absence was a bitter pill to swallow as the Gunners lacked his determination, inspiration, commitment, doggedness and technical ability.

If he can focus on improving his game, starting with the all-important clash against Manchester United, it would go a long way in restoring him to his good form.

You have to be good before you can become the Alexis, I mean, best.