Bayern 5-1 Arsenal: The Germans Teach the Gunners a Footballing Lesson 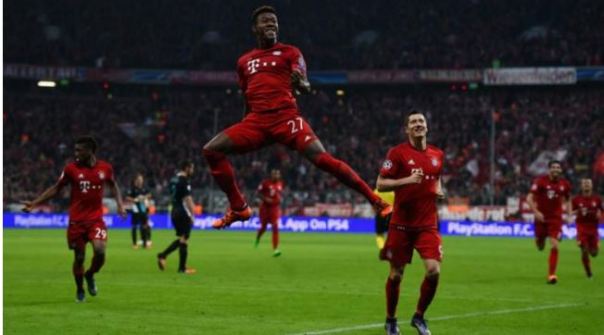 Here we are, back down to planet Earth after flying high in recent weeks. To be honest, I expected Bayern to probably nick it with a goal or two – not the shitefest I witnessed last night. I know it would sound like sour grapes but Arsenal’s injury situation is downright saddening. As if the losses of Jack Wilshere (ankle), Tomas Rosicky (knee), Danny Welbeck (knee), Aaron Ramsey (hamstring), Mikel Arteta (ankle), Alex Oxlade-Chamberlain (hamstring), Theo Walcott (calf) weren’t enough, Arsenal suffered two key omissions to their squad as Hector Bellerin (groin) and Laurent Koscielny (hip) missed out on such a crucial match.

Wenger spoke about the importance of defensive discipline in the build up to the game but it took just 10 minutes for the floodgates to open as the in-form Robert Lewandowski latched onto Thiago Alcantara’s brilliant pass to head the ball home. Nacho Monreal and Per Mertesacker had done their bit to keep the Polish forward offside but Gabriel Paulista wasn’t on the same wavelength with his defenders as he kept Lewandowski onside. Arsenal responded superbly, or felt they responded when Monreal’s cross was guided into the net by Mesut Ozil but he was adjudged to have used his arm, thereby earning himself a booking.

Bayern’s lead was doubled thanks to some atrocious defending by Matt Debuchy which allowed Thomas Mueller to fire a shot that deflected off Mertesacker leg before going past a hapless Petr Cech in goal. Bayern continued their siege of Arsenal’s goal and the Gunners had their goalie to thank for keeping the scoreline respectable but there was an air of inevitability about another Bayern goal and it came from David Alaba. The Austrian fullback robbed Santi Cazorla off the ball beofre smashing a beauty past Cech to make it three.

There was no way the Gunners were going to recover from three goals down at halftime and I expected Wenger to at least revert to damage limitation but sadly, there was no one on the bench to offer any sort of confidence. All we had was a young goalie, a couple of defenders, some of that Flanimal goodness, Alex Whollup iWhobbey and JRA. I knew things were going to turn for the worst when Arjen Robben was summoned and he compounded the Gunners woes when he scored with pretty much his first touch. Gabriel’s lack of awareness on Robben’s position was a concern. He also failed to close Alaba down for the down which showed that fingers could be pointed at him for those goals.

Arsenal got a consolation goal with a wonder strike from Olivier Giroud but it was good to see the Frenchman banging in the goals on a consistent basis. That took his tally for the season to eight goals in 16 games, which also means that he now tops the Arsenal goalscoring charts. Wenger must be commended for managing the Giroud and Theo Walcott situation well and their competition has brought out the best in both forwards. Muller killed off the contest with another goal strike but one wonders why he wasn’t closed down quick enough.

Muller’s goal but the Gunners in the record books for the wrong reasons, as that defeat was their heaviest in their Champions League history. I, like many fans out there, also had half an eye on the Olympiakos vs Dinamo Zagreb game. The Croats were leading the game before a brace from Pardo put Arsenal’s qualification hopes on a thin thread. Now the Gunners have to hope that Bayern beats Olympiakos in MatchDay 5 (provided they win Dinamo Zagreb too) and go to Athens to win by at least, a two goal margin.

Results like this affect confidence but we can take some solace from the fact that Arsenal has responded really well to recent disappointments.

It would take a while for this to sink in.